This first of three sections (Part 3 is still in process) is about being an artist, gay, producing performances, the resulting pain and exhaustion—mainly delivered with a series of repetitive and energetic movements performed by Mickey Mahar, as a skinny, pale, aerobic addict with a pink headband, and Miguel, amply filling out a pink bathing suit for a lady. Miguel is the mid-career artist, not young anymore, but present, offering himself with a mix of exhibitionism and charisma.  In one scene, he and Mickey, as his younger follower, remind us that they are the DANCERS, playing with the consonants and vowels of the word. Like clowns in a circus, between reality and magic—it is poignant.

Pain occurs, but also pleasure. The last section seems to refer to the suicide note, part of the title: the artist throws himself into the show, let’s do the show—there is no business like show business—with songs, augmented voice, white fairy costumes. We are all bathing in a pinkish-bluish light (carefully mastered by Lenore Doxsee). The communion with the audience is at its peak. A kind of ecstasy. They are both exhausted, but not me, and I have a really hard time leaving the room.  I want to dance too.

I have seen this performance twice, once at the Whitney Museum, last spring, in a much smaller white box than the downtown Gibney Dance Studio. At the Whitney, my eyes could not move that much; I felt riveted on my chair, very focused and close to the performers—like the experience of looking at a painting on a wall—but we felt squeezed in this small space.  At that time, I called Miguel’s performance: “His (her) love letter to the world.”

Miguel’s questions on aging, consumption and exhaustion could be everyone’s questions, not just simply an artist’s or a gay artist’s thoughts. He reminded us about them with so much love and generosity. 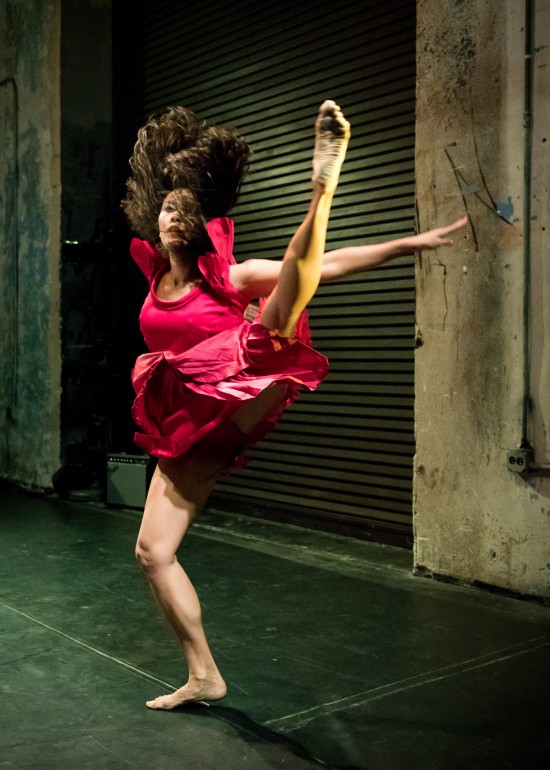 Michelle Boulé in Miguel Gutierrez’ AGE & BEAUTY PART 2: ASIAN BEAUTY @ THE WERQ MEETING OR THE CHOREOGRAPHER & HER MUSE OR &:@&. Photo by Ian Douglas.

Age & Beauty Part 2: Asian Beauty @ the Werq Meeting or The Choreographer & Her Muse or &:@&

There are famous paintings about the artist and his model, the artist and his/her muse. There are dances choreographers have built on ballerinas. It is a private relation between them, often complicated, but their obsession is a source of inspiration.

In Part 2, Miguel shows these relationships with the same raw, conspicuous, performance quality as in Part I; he demonstrates their intricacies, including financial and travel issues (valuable to his creative work) and exposes the many skills required to translate these realities to the stage.

Miguel is respectful. He has several muses and he pays homage to their works, to who they are.

This section shows the inspiration they bring to him, the aging choreographer—Miguel is not old, but his questions as a mid-life career artist are real.

One of the muses is the dancer Michelle Boulé, who has been in all Miguel’s work for the past decade.  She is amazing, throwing herself in the movement with rage and fearlessness, kicking her legs and arms, swirling and spinning, hysterical sometimes, vulnerable other times, and physically and technically so centered. Some moments of the previous dances can be seen briefly, for example Last Meadow (for which she received a Bessie award). Michelle embodies all of Miguel’s worries and anxieties—no easy task. She is a tour de force.

The two other muses are Ben Pryor, his company manager (and also founder and curator of the American Realness festival) and his lighting designer, Lenore Doxsee, most of the time invisible to the audience but overseeing every aspect of the performance.

At a table, Ben, calm and poised, faces a nervous and anxious Miguel, interpreted by the performer Sean Donovan. They discuss budget and itineraries issues. Reality and Inspiration, Money and Art:  How does it work?

Yes it is dysfunctional and chaotic as it is being performed in front of our eyes, in a series of scenes—but art is everywhere. They, the performers, they reunite—without the lighting designer who stays at her operating table—for a farandole and festive dance…The show must go on.

Nicole Birmann Bloom works as Program Officer, Performing Arts, at the Cultural Services of the French Embassy in New York.

(a note from CLR: these Writing Realness pieces came out of TO WHOM IT MAY CONCERN, a Movement Research writing workshop I taught in conjunction with American Realness 2015)