Do you know a means of addressing betrayal? I’ve known people that lived in bubbles. Go to Google and type “creeks” in to the little bubble… …It’ll be the best Google Search you’ll do in your whole life.

But has he thought it through? Or is he going with the feeling in his gut since it’s a gut feeling when a man decides to touch his dream? He’s capable of better. And I don’t know about finding love that way in the dark, either.

Just enough light to be called dark. Just enough to know it’s out there, brilliant, somewhere – not here. Here its absence reminds me of how unavailable it is. I saw him in there and I heard him saying, “I want it so bad.”

He’s lost his mind. His eyes are shot, they’re shut. Blame yourself, don’t blame life. I do blame myself. that is the truth, and a waste, in the furthest outer reaches of his so called mind

me – leaning forward, listening hard, ready to be moved  like being in love no it’s like a second class movie, right? as in b follows a? we spectators will watch a scene, for example, the rescuing of delicate women from danger and the more they struggle, the more fun we have watching them…Here I’m a slave to nothingness invisible to myself and everyone else.

Saying “I wish to die” instead of a simple “good night” is no way to kill yourself. In saying so I’m quite certain you mean the exact opposite. That you wish to live and just don’t know how.

I’m sorry about your drawer……… and your divorce.

forget it – just stick the ax in to me, set me free, I wish to die/ 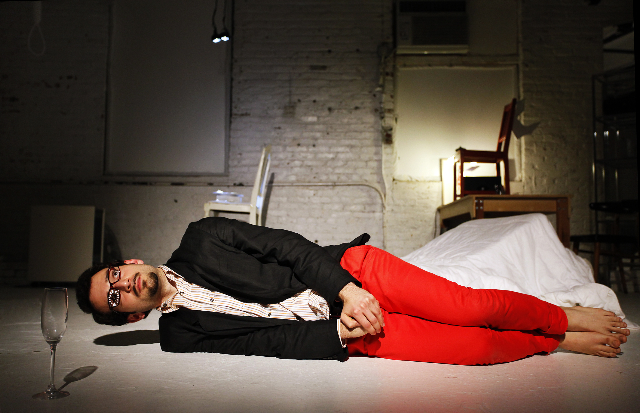 I thought just deal with silent voices, you’re better off than with ones that talk back/ I had some great sex with strangers.

people don’t know what they want, they only know they’re not getting it.

sometimes the things that are killing you are the best things for you, I always say….i’m not doing this for frivolous reasons

the timeless catastrophe always arrives, on time every time…we no longer have anything of these hours in common make a little poem, and then be dead

shhhh… It’s quiet now, everything’s still. Our foot steps are all over the hills out there  He is remarkably hurtable

Stick the axe in me.

in the desert we have a saying – don’t use the testicles of the fish you’re trying to catch as bait!

say it simply – what happened to you?

nobody understands what you’re talking about – learn to speak.

my job is to protect you and save you from your madness becoming a reality a madness I couldn’t prevent I can feed you  but I didn’t give you your words maybe some random pattern you saw in the sand today… how do I say this? life is too God damn magical and it is never enough for people like you. what does your world look like anyway? one magical night that never ends until the walls are covered with your guts? keep dreaming that, and one day I guarantee you, you will cover the walls with your guts and that can be my legacy to you until then all the tricks have to stop, every word of yours wants to do tricks

How do I say this?

peel back the veneer and look around

Too much has been written down, who has energy for all that reading?

not to mention the eyeballs

*all words taken, completely out of context, from Peter Jacobs’ Sand, which the Performance Club saw Saturday evening at the Chocolate Factory