Those of you who followed the old Performance Club may recall my ode to 53rd State Press, a boutique outfit for contemporary performance texts. Here’s a little excerpt from that 2009 post:

“I was always the person who kept everyone’s scripts from readings,” 53rd State founder Karinne Keithley explained to me one raw afternoon last week at the Outpost cafe in Clinton Hill. “And I was backing away from performance personally, thinking of other ways a work could be completed. I started thinking about plays that came in boxes rather than were performed.”

Well, the 53rd State is still great. (I use these books all the time – when I’m teaching, when I’m writing, when I want to look at something fun and interesting.) And, like the P-Club, the press has been reimagined. 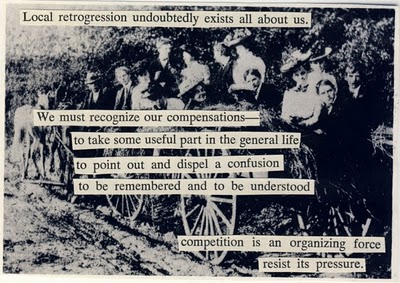 This arrived in my inbox a few days ago:

We are happy to announce the re-launch of 53rd State Press, the Press for new plays and performance texts that interrogate, challenge, contort and emblazon the relationship between language and performance.

There is very little representation in print of new writing for performance. Many of these texts live in public only for the duration of a one or two-weekend performance run.

Originally founded in 2007 by Karinne Keithley as a one-person venture, 53rd State Press preserves and distributes new performance writing by a flourishing community of writers. Between 2007 and 2010, it published seven books with works by artists such as Miguel Gutierrez, Nature Theater of Oklahoma, Sibyl Kempson among others.

Now, 53rd State is returning in the standard key of the 21st century: sustainability. Co-edited and co-administered by Karinne Keithley Syers and Antje Oegel, the press has incorporated, initiated the process of becoming a non-profit organization, and adopted a debt-free business model.

and we need your support to do this work.

We ask you to subscribe either to individual titles or the entire season catalog not because subscription offers massive discounts (though it does discount the titles), but because you, as a reader, are a member of the community.

How does it work?

In a time when the economic good sense of business models based on large initial debt is justly under reconsideration, and a time when the entire structure of the publishing world is undergoing profound changes, we have chosen to adopt an 18th century publishing strategy: subscription. While 53rd State books will also circulate within the existing models of book distribution, our primary aim is to publish each season’s catalog for a base of subscribers. The size of our subscription audience will dictate the size of our output.

Working on a September-June calendar, we will be publishing four books a year. Our curatorial range includes new writing for performance — in theater, dance, and spaces in-between — as well as new plays in translation. Our catalog will generally include three smaller volumes and one 3-play anthology. Titles will be available in all ebook forms in addition to traditional print.

If you’re still reading this post, if you haven’t already clicked over to 53rd … well, ummm….quit it. Go order a book already. I’ll buy you a beer at our next outing if you’re disappointed. You know, a metaphorical beer.