Home » Blog » On the Boards

This is how OtB’s artistic director Lane Czaplinski puts it:

We asked Claudia La Rocco to be our writer-in-residence because a) she’s as much of an artist as she is a critic, b) her critical faculties combined with her poetic voice make for compelling reading, c) we hope the vivaciousness she exemplifies in her watching and responding can inspire others, and d) we wanted to hang out with her more. While the parameters of the gig are a bit open-ended, we suspect she will pen a few thought pieces on extraterrestrial subjects, weave poetry and text into the fabric of our physical and virtual spaces, and organize performative duets and/or wrestling matches with visiting and local artists. Maybe she’ll read a little, too, or maybe she’ll only make root beer floats (although she hates root beer so probably not).

This is a picture Nancy LeVine took of me on one of the Seattle ferries while I was doing some work for OtB. I don’t know the boy (reading Thoreau no less) … he was pretty accommodating about the whole thing, until he wasn’t: 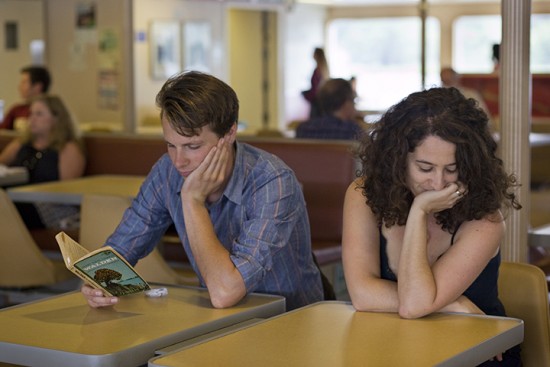 I wrote this essay, INTERMISSION, for the season brochure:

1. Does anyone read season brochures? It’s me, Margaret.

2. At first I thought that this was going to be a lightly edited version of a lecture I gave at the Walker Art Center’s Superscript conference on “connectivity and community” in May, a lecture (findable on YouTube et al.) which itself stole from an interview I gave to a Yale University student who was studying The Performance Club (this thing I started several years ago when I was gigging for WNYC radio that is now on its third life at ThePerformanceClub.org, if you’re interested). The talk seemed to be in keeping with a lot of the things Lane and I have been talking about. How you get restless. How you can become too beholden to the notions of others. How you can adore talking to (or should I say connecting with) smart people and shudder at the idea of “community.” Or something.

But now I’m not so sure that this is a good strategy. I just opened that lecture back up after a month or so away from it, and it feels like a dead thing. Repertory theater for writers.

3. I was interested in the possibility of creating a third space. I don’t care if everything’s been done, Lane. I’m still waiting for you to live in the penthouse above the theater.

4. It’s not that I don’t care about my readers. It’s just that I don’t necessarily think of them. I mean, when it’s their turn to take over, they do. But it’s not their turn yet. I mean, if they were sitting here with me in my boyfriend’s living room in Oakland, where I am living for the spring, I would probably try these passages out on them. What am I trying to say to you?

5. Something about a dense, slate-blue sky. The scale of the truly big ships. The highway rushing along beside the harbor. An idea of speed and solitude. My first time in Seattle, I was in town to review a ballet production for The New York Times. And to do some side reporting about dance competitions. My private affairs were in catastrophic disarray, and I was immensely, devastatingly sad. Paralysis. It seemed almost impossible to leave my hotel room. I took a car out to the suburbs, to see about this competition. Once there, I was unable to do anything, and left almost as quickly as I arrived.

6. I salvaged enough for what would eventually become this lead:

There was no football paraphernalia in sight. The prodigious war paint instead revolved around hot-pink tulle and rhinestones, and the day’s diminutive contestants could be easily identified by their proclivity for high-pitched, synchronized squealing and bare (at times bejeweled) midriffs. They traveled in fast-moving packs, trailed by gusts of glitter, feathers and serious-looking, rhinestone-unadorned women. At Starpower, the men were largely afterthoughts.1

7. Your white truck positioned on one of the big ferries pointed out to sea. Onto the peninsula, and into the Olympic forest.

The truck gets as far northwest as it can go, and then our feet go the rest of the way. Rain coming harder now. Preludium for jazz band. The rock is still floating through space.

Eyes returning to the offshore outcropping of rock, disappearing and then returning in the fog. Pigeon guillemots.

The waves of water coming and the sea birds wheeling below at such hard angles. The sky is dark. Mists that come in and obscure everything, but they don’t last. Water coming in on curving waves of glass. Spider webs full of its heaviness. Water dripping from every needle, jeweling on knobbed finger-like branches. Animals moving past on either side like dark ghosts. No one else on the path. And my feet turn around and I go back, further and further away from the northwestern most corner of these contiguous United States.

8. Some notes I took while watching & thinking about Michelle Ellsworth work on something at OtB:

questions of 1. Attention span(s); 2. Medium(s); 3. Music/no music – how much manipulation do you want to impose?

very aware of being a performer—or, on display, at any rate … and how you vary tempi and direction controls things

Questions of individual responsibility vs. ease of going with a system, feeling protected, seen, and at what cost?

–do you build themes into the structure, or do you underline them via content

–confession booth, the feeling of wanting to tell you everything

–feeling of surveillance, wondering, can people see me in here? That as a delicious tension

–what if the technology “misfires”? If you follow directions but it follows an alien (divine? Ancient? Greek?) wisdom of its own, this machine?

–why do a stage piece at all?

Someone said “I had some desire to create some sort of compensation, how can I make this ok?” (I think it was G.). [Now I feel awful—I didn’t take you out! I sat on you and felt good …]

It’s like a Rorschach test. Driving up here P. and I passed a sign in rural Washington: “Is it immigration or an invasion?” … –color cow lung so piece does not [and here I am sorry to say I don’t really know what I wrote—maybe “suck stat”??? no idea. Disregard]

–thinking of the movie Her and global positioning … from Hal 9000 to Her … how we do and don’t relate to those systems ….

Pre-Homeric Greek; emotions, etc., on outside of body

Ramshackle nature of it … nice to not nail down the versions.

Do you have to make it tighter?

9. There’s nothing so symbolic as geography.

I scanned the internet

I spent most of my shifts composing

I realized I wasn’t a journalist

I began to think of criticism as a Trojan horse

10. I didn’t even realize I was sitting on Michelle Ellsworth. Later, perhaps that same day, she did a dance in the hotel bathroom, with Zoe, for the towels. Who I am betting have no idea how lucky they are. If people were less like towels, more of them would be at her shows. I wasn’t, as it turns out, at OtB for the actual performances of Michelle’s show, which ended up being called Clytigation: State of Exception—or, I wasn’t there in the flesh. But I performed in the work. Specifically, I worked one of two phones Michelle had included in the installation, talking with whoever felt like picking up. Are you there, God … indeed. There’s something incredibly sexy about being a disembodied voice. Sexy in a way that has nothing to do with phone sex, mercifully. But intimacy, anonymity, a certain permission to perform oneself however one wants. The worst that happens is someone hangs up. Meanwhile, you get to imagine the best show of your life. The ideal audience. The perfect moment. The Operator standing by.

11. I’m on a plane from Seattle to San Francisco. A little plane, tilting fiercely the way little planes do high up here in the dark clouds. It’s Monday night, 6:29 to be precise. I have just spent the weekend watching four dances by Tere O’Connor: The large ensemble work BLEED, which enfolds and explodes elements from the three smaller dances Secret Mary, poem, and Sister.

So many bodies cast into and about space. Pleasures of full movement, both simple and ornate. Collisions of virtuosity, formalism, technique, rigmarole, the pedestrian, the absurd. All the little cruelties we casually gift to others, to ourselves. The events that don’t quite come into being, and in fact are gone before we have ever fully registered them. Torsos folding, manic arms, sensuous and sensual grasping. Bodies curled in and curving. Breathing room. Gender performed and performing. Moments in time as characters.

This mini-survey came courtesy of On the Boards theater and Velocity Dance Center, making Seattle the only place other than the American Dance Festival to showcase this particular moment in O’Connor’s extensive body of work; lucky them, and unlucky the rest of the country. I had seen all of these dances before, other than Sister, and I have seen just about everything O’Connor has made in the past decade. But the cumulative weight of experiencing them all together like this—I wasn’t expecting it to feel so important.

The mind watching others. The mind watching itself. That’s something I thought a lot while taking in these restless, exactingly built dances. They are the sentences I would choose if I had to say what these interconnected pieces are about—but the less reductive answer is that this question of “aboutness” is the wrong one entirely to ask, or answer.2

12. I’m not convinced that Kristen Kosmas is capable of making anything that isn’t good. I could sink into her art forever.

13. I’m so uninterested in anxiety around criticism. It just seems like a given. That’s one of the things I wrote in the Walker script. Also:

“Is there a way to say that the island of misfit toys suits you more than the mirage of inclusivity? That you’re worn out by the evangelism game artists and writers are supposed to play in this country? I have no appetite for convincing anybody of anything. Also for lasting—we don’t last, why should the things we make be any different?”

This is something Lane wrote:

“We’re not a bank or a law firm. We’re an arts organization. Let’s act like one.”

“There is not much time left. There are only a few moments left to say something. Those of us who watch and listen would do well to realize that this is not an indefinite proposition.”

14. Writing is time-based, too. You have to earn certain states, certain maneuvers, and you don’t always realize you haven’t until the printer stops the clocks. Marble and mud, isn’t that what Hawthorne thought? The late day sun slanting in. Afternoon drinking. Finding your tribe. Coffee in the morning and the giant hill at night. Four or five years ago Sarah Wilke had me make a list of the things I wanted my life to be composed of. I’m convinced she’s a magician. To change and keep changing. I had a great-aunt, who, in that deep-seated immigrant need to assimilate, switched her name from Margherita to Margaret. I understand. And also, the loss. The power of naming.

My brain on Jon Kinzel