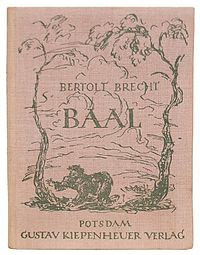 Our July outing was interrupted for me (and my guest, Leah) when, at about 7:45 pm on Thursday, July 26, we got to Grand Army Plaza on our bikes (making our way from Gowanus over to Jack, the performance venue, in Clinton Hill) and the sky opened up into a violent deluge. Neither of us had any waterproof bags for our phones and wallets, plus it seemed quite dangerous to be biking amidst the sliding cars and crashing rain, so we had to take cover and wait it out, and it didn’t end in time for us to make the show. As much as this bummed us out, at least we didn’t die in the storm. So we went the next night.

Turns out this was a great beginning to Baal by Brecht, which features lots of violent nature images and moments as its lead character careens through an out-of-control life that leaves destruction and chaos in its path. The production featured percussion from members of the Kaoru Watanabe Drumming Center that mimicked thunder, Baal himself was constantly trying to fuck trees and convene with the cloudy sky, and a storm of madness and tragedy washed through the lives of anyone who got wrapped up with him.

This was Brecht’s first full-length play, and it predates all his alienation effect and epic theater stuff. During the show I found myself thinking of The Butthole Surfers, who used a bullhorn much to the same effect as Baal, and who Brecht seemed to be presciently writing about. The poet as anarchical sexy suicide machine. Of course, the poet today is the rock or rap singer whom we expect to find his creativity thru self-destruction. Gibby Haynes, the lead singer of the B-holes, typified this perfectly. The romantic savage dying of his own desperate search for an amoral language.

The play got me thinking about ethics in theater. So much of what is now called performance (not theater) might exist in an ethical conversation, but it is usually between the apparent (often unstated) political position of the creator and the world outside the performance that is being referred to through the performance’s themes. The ethical conversation is not embedded in the work, but is rather a precondition of the work that seems to have given the work its reason to be, but inside the work itself, there’s very little time spent working one ethical position vs. another. Performance is itself an expression of an ethic, and its counter-ethic is simply whatever it is beating itself against. But inherent in this is that no ethic is really seen as having validity, except the desire to perform (which is assumed ethical) and point out unethical behavior. This is different than in larger scale theater, where various ethical positions are all taken seriously and their consequences played out dramatically through action that is enclosed upon itself. I left wondering if “performance” is losing out in this deal.

Brecht made a whole career out of depicting nasty unethical people in order to conjure the repulsion of his audience and hence steer them in the right ethical direction. He pointed the ethical discussion of the play out at the audience as opposed to only between characters. Baal is such a piece, and it did in fact get me thinking about who we worship and why. I think the actors and the designers and the director all did an admirable job with a piece of somewhat fumbly juvenilia. Loved the madhouse scene, and found the tinfoil on Baal’s head at the end to be extremely effective. A very jarring and powerful and well-done production all around.

I wonder – did it make anyone feel they are culpable of supporting the Baals of the world through their tastes in cultural heroes? That would be an interesting ethical assault…

The Theaters Are Dark