Sean Mahoney and Heather McGinley in “House of Joy.” Photo: Paul B. Goode.

With Paul Taylor’s choreography newly set inside the proscenium arch of the theater that Lincoln Kirstein built for the New York City Ballet, how not to read his work within that context, as well as the overarching Taylorian one from which it springs?  You can, for instance, approach his new House of Joy as a gloss on Jerome Robbins’s seemingly innocuous  Fancy Free (1944).  Because what do you see when a sailor saunters on stage in search of female companionship, if not a visual echo?  Intentional, or coincidental,  there are clear correspondences. Seeing the Paul Taylor Dance Company at the Koch Theater is like looking at it though a new lens. The theater is larger, but the dances seems more enclosed.  These dances have always been self-contained worlds, but here they seem more so.  You can peer in.  You can fall in, the way Harry Potter falls into Dumbledore’s pensieve, that stone basin filled with a silver fog of memories. And, as ever, you can make stuff up about the dances. This is delicious, and fun, to let your mind range around inside a repertory, finding things to think about…. Why take Paul Taylor literally, I wonder? People seem to do it, but while he is plain-spoken and unfancy in movement terms, he is a fanciful dance-maker. Macabre, but fanciful.

Which leads us to the final weekend of the company’s three week run, and the Saturday Matinee From Hell. On the program: Oh You Kid (1999), involving among other amusements some larking about by the Ku Klux Klan, and an intermission;  House of Joy, that brief work—devoid of pleasure—about some hookers and their pimps and their johns—with one undergoing a beating that looks suggestive of gay bashing, despite the story line; and then after a pause, Big Bertha (1970), a work of such utter depravity that it is a source of amazement to me that it ever got allowed on stage in the first place.  This was topped off by Esplanade (1975)—which I adore as who does not?—but I staggered out after Big Bertha to think over what I had just seen. It was so grim that the children in the audience and their chaperones were invited to enjoy an ice cream party during the middle two numbers.

Watching these pieces I wondered, Who are these people rattling around in the choreographer’s head?  That’s for him to know  (or not know—his choice)  but whether his  dance-making is displacement, projection, observation, fantasy, or what have you, once it’s on stage it is what it is: art.  Dance fiction. What kind, from what period, for whose delectation, and their contemporary applicability and relevance are currently popular questions beyond the scope of the kind of thinking I do about these things. It’s becoming trendy to call Taylor dated, or cloaked, though really the only thing dated about him is some of his latter-day costuming. Nothing stales like stretch fabric. In  House of Joy, the choreographer is possibly addressing these literalist critiques. He casts his most beauteous female (prima inter pares in a stable of pulchritude) Parisa Kobdeh as a vicious character of indeterminate sex—her breasts are clearly there but  she otherwise leans towards male. A biker, in the market for a sado-erotic threesome. She doesn’t happen to pick the sad wallflower hooker  played by Jeffrey Smith.  Like Kobdeh, he’s not really successfully transitioned—he has huge biceps—and he can’t walk in high heels. His gender is entirely smudged, and the message seems to be: This is make believe, there are characters, this is the theater, my mind is singular but my themes are plural. This isn’t about me, and it isn’t about you. Social relevance comes and goes; but these dances are always relevant to me. First of all because they are objects of beauty; and second, because they are interesting. (I like thinking about matters like revealment and concealment.)  Further, love is always in season, and true evil never goes out of style. 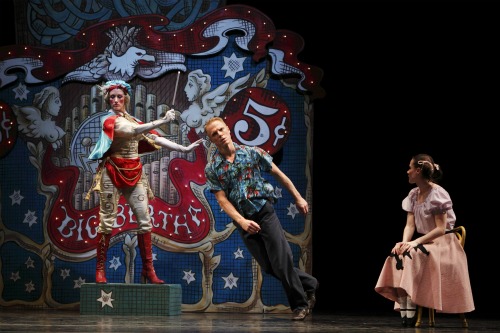 Big Bertha is just that. Evil. It seems to show how an unfettered libido functions outside the restraints of common decency and common sense, this season via a true Apollo of the dance theater—Michael Trusnovec, who elsewhere during the run was the sunlit god at the center of Aureole. Trusnovec doesn’t look anything like Evil, being a  blond prince of lightness, but there he is, got up in clothes from the Eisenhower Administration, and off to the fairground with his wife and daughter. These two are a sub-plot unto themselves: the daughter can dance up a storm whereas the mother is beginning to trip—or always has tripped—over her own feet.

That’s an old story. The girl who outshines her mother. Otherwise, this dance is totally Oedipal, except Oedipus here is not enjoying the sexual favors of a woman who unknown to him is his mother—like say, Paul Taylor dancing with Martha Graham in her company, when he was a handsome young man, and she was a ravenous Jocasta, no matter the name of the roles she gave herself.  So here’s the story Martha’s son Paul tells in Big Bertha: At a fair ground, a decorous family happens upon a patriotic looking nickelodeon. (Its name is the same as the infamous German howitzer, but also serves as a portmanteau moniker for things that are large for their type: Big Bertha.) The happy scene immediately spirals out of control, until under the influence of  this malign Freudian Jukebox, father debauches and then rapes daughter, to carnival music. Meanwhile, mother discovers  dirty dancing, and stripping to her chemise, does some suggestive things with her scarf. And we sit there slack-jawed at what we are looking at.  Exquisitely danced, exquisitely lit, exquisitely designed, meticulous in every way. Fantasy is one thing. This is something else. What it seems, and something else.

So let’s see. What’s going on here?  Some people arrive on the scene, just kind of happy go lucky normal folks. They torture an authority figure with a wand into playing music and conducting them in dances. The figure takes over, directing them in ways that are shocking and seem to expose their darkest secrets. These are dancers, I thought, and Big Bertha  is Terpsichore, the Horrible Awful Muse of Dance.

And then I got it. Bertha is Martha. Because back when he made this dance, Taylor was himself in it. He was telling his own story! He was just an ordinary guy, handsome as the day was long, and he wandered into  Martha Graham’s studio and the next thing he knew, he was up to his ears in onstage incest. These days, he’s moved on. And up. Offstage in his studio, Paul Taylor is up on that platform now.

Paul Taylor is Big Bertha! The dancers wander in, and again and again and again, they start him up,  he raises his wand, and out pours choreography. And the next thing they know, they’re cross-dressed hookers. They’re the stuff of  nightmares, of daydreams, of sunshine, of sorrow. Whether Taylor enfolds us in joy or grief or melancholy or horror or sentiment or comedy  or introspection or retrospection depends on I don’t know what. Maybe the weather. Maybe his dog at any given time. Maybe what arrived in the mail. Maybe what he’s reading.  Maybe—and this is so likely it goes without saying—the music he decides to work with…

The music. There is one last possibility. What if those people in Big Bertha are attending a matinee? They buy a ticket, the apparatus jerks into action, and people are made to dance. We make them do it. Time and again, year after year. I don’t know whether to cry, or to laugh. But this:  when Paul Taylor takes a bow—still dreamboat handsome in his dark suit—I rise at once to my feet. He tugs at me. He’s a man for all seasons and a man for all moods, and every spring since forever, it’s Taylor time.

NANCY DALVA frequently writes and speaks about  dance and related subjects. A Critic Fellow of both the Eugene O’Neill Theater Center and the American Dance Festival, she brings the perspective of a dramaturg to a subject without words. Her website is www.nancydalva.com.

We call it “dance therapy”