It is a delivery of a confidential message in a private space. Archangel Gabriel visits the Virgin Mary, revealing to her a change in her own bodily state unbeknownst to herself: Immaculate Conception.

The most striking characteristic of the European paintings depicting this biblical scene, particularly those from the 15th and 16th Centuries, is the fact of this closed room. In the images created by Robert Campin (1425-1430), Jan van Eyck (1434), or Botticelli (1485), the Archangel seems to have suddenly appeared in Mary’s chamber, disregarding the physical boundaries of the space; the divine message, depicted in the figure of a dove or a ray of light, trespasses the windows to reach the Virgin’s ears. The echo of this miracle can be found in a particular building type in Western culture that extends from confessionals in churches to modern proscenium and black-box theaters: a pseudo private space installed in the middle of a public sphere.

The closed room can also be seen as Mary’s womb, in which case the miraculous intrusion becomes analogous to the divine intervention into the Virgin’s body that materialized her Immaculate Conception. The paintings then appear as depicting Mary placed inside her own body, Gabriel breaching within not only to announce her pregnancy but to realize what he announces by the very act of doing so. In this way, Gabriel’s message is performative. The privacy of the closed room is the privacy of the body, a secluded site of various exchanges, corporeal as well as informational—these can give birth and trigger growth, but they also invite death.

I was flooded by imagery of these paintings during Vesna’s Fall by No Collective and Lindsey Drury at the Queens Museum earlier this spring (No Collective produced Race Music: Cody Eikman’s Moving Instruments in 2013). Although announced as a dance piece, the work engaged in neither the investigation of movement nor display of bodies that one might expect from that genre appellation. Instead, its basis lay in secluding the dancers inside four closed rooms: 14-feet wide circular contraptions swaddled in translucent shower curtains that roamed around the spacious foyer of the recently renovated museum. Differentiated only by vaguely visible colors, each room was mounted on the dancers themselves by means of a backpack frame. These miniature mobile theaters were akin to confessionals inside a shared space. The dancers (Lindsey Drury, Paige Fredlund, Kaia Gilje, Molly Schaffner, You Nakai, Laura Bartczak and Katelyn Hales) remained concealed, their presence growing ever more ambiguous. 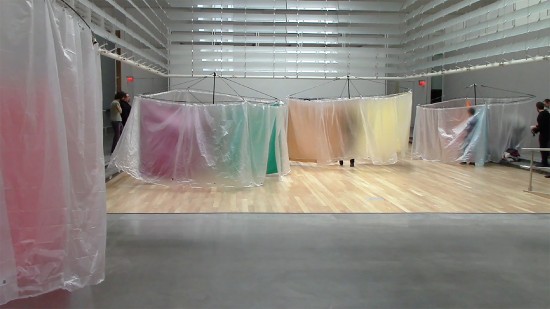 Vesna’s Fall was designed so that each audience member went through a different itinerary. Two rooms enticed viewers to enter, voices from inside describing various events taking place therein. These ranged from the fantastical to the absurd (a generational dance by a naked mother and daughter; a private film festival of pornography; warm cookies or croque monsieur for the taking). Entering one room, I found that the enticements were false advertisements broadcast from a speaker. The dancer carrying the room immediately asked me to help her by taking her place for a moment. When I complied she left, the broadcast continuing regardless. I waited for the next person to be lured in, and proposed to him what I had previously been asked (in retrospect, I am not sure whether the first dancer was a dancer at all).

After returning to my role as an audience member—but did I, ever?—I discovered that the second room, also calling out false enticements, contained a dancer entirely covered by shower curtains. This time I declined to comply with her plea; after a successful exchange with another viewer, she walked blindly out of the room and was soon twisting, swinging her arms around and growling like a dog, curtains flying off her body. Finally, clad only in her underwear, she lay on the floor, remaining until another roaming room swallowed her. At this point she began an awkward negotiation with the owner of that room; eventually the curtains were placed onto the new dancer, who exited to dance in the same manner as the first.

The third room had two underwear-clad dancers speaking enticements into a microphone, which seemed to be wirelessly transmitted to the other rooms. Every time someone peeked inside, these half-naked dancers screamed. The last room had two more dancers, attached back-to-back to a single backpack frame, who yelled instructions to each other, their voices loud enough for all the other rooms to hear and follow. 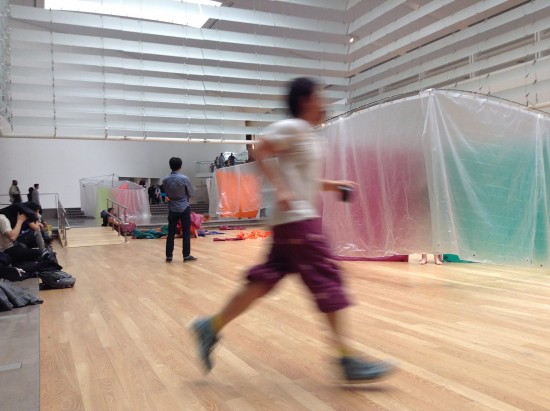 You Nakai running around the four rooms with a harmonica in his mouth. Photo: Kota Yamazaki.

Meanwhile, a dancer who had burst out from one of the rooms at the start of the performance ran around the space with a harmonica in his mouth. Adjusting his trajectory according to the location and movement of the rooms, he kept jogging for the duration of the piece. The inevitable changes in his breathing were rendered audible in the harmonica’s shifting rhythms and tempi. Whenever he paused for rest and the harmonica ceased, the entire dance also halted until he took off again. The performance ended in a gradual fade-out, dancers leaving their rooms one by one after the runner had finally collapsed and showed no signs of recovery.

All of the movement in the piece either produced, or was produced by, sounds that traversed the physical boundaries of the room, like the divine message that infiltrated Mary’s chamber. Each created a space of its own through the range of its audibility, which determined, and was determined by, the movement of rooms and bodies in space. The rooms took on two functions, analogous to the duality of the Annunciation: the exchange of costumes/bodies in the rooms contrasted with the exchange of costumes/bodies as the rooms. This oscillation created an uncanny perception regarding the scale of bodies in the performance: the room housing a body (or bodies) also appeared to be a body in itself.

Like Gabriel, like a virus, like sex, a body enters another body and a private exchange takes place—this was the basic operation underlying Vesna’s Fall. The critical issue, therefore, was from where you experienced the piece. I could have chosen to place my body outside the rooms, in public, appreciating the aesthetic harmony of their translucent, wavering skins reflecting the ample, light-filled foyer of the museum. But then I would have only seen the residual of exchanges, the egestion and excretion from the moving bodies. If the rooms were bodies, the visible dances outside them would be tantamount to their excrement. The accumulative process of exchange meant that the work was increasingly performed by people with only a partial knowledge of its mechanism. Thus, time in Vesna’s Fall could have been perceived as the deterioration of order—dissipation of informational as well as corporeal energy—until finally the system ran dry. 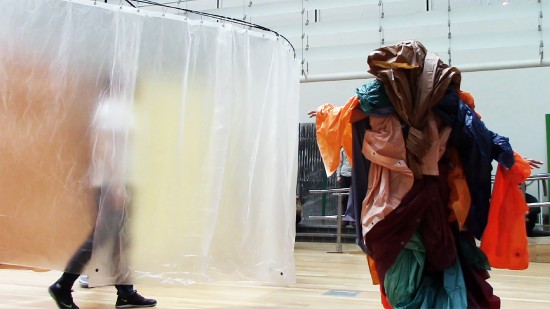 But messiness was only how things looked from outside. In order to actually experience Vesna’s Fall, one needed to offer one’s own body unto the larger body of performance, which—like all bodies—grew, and grew old, through exchange. The four rooms were, in this regard, roaming mouths—they ate people as “food” to sustain the metabolism of performance. Once consumed and incorporated within, audience members went through a series of transformations, informational and corporeal, slowly digesting the piece while being digested by it.

As I wandered through the body of Vesna’s Fall, I found myself projecting depictions of the Annunciation onto the situation. After contemplating in a muddled way whether I was Gabriel or Mary, the sudden intruder or the solitary witness, I thought instead about the viewer of the paintings. It seems that even with paintings, being engaged with a work means being incorporated by it. I wondered if it even mattered whether the depicted room was actually closed or not, since all paintings close themselves through one frame or another (as performances start and end). Through this seclusion they give themselves a body—a material continuity separated from the rest of the world—that allows them to eat and be eaten, so that private exchanges may take place and something new may be conceived.

When I described to No Collective’s Kay Festa the imagery of the paintings I experienced inside Vesna’s Fall, she replied: “That’s funny, I thought I came up with the idea for the contraptions out of nowhere. But now I recall that I first thought about these rooms when I was standing in front of Robert Campin’s triptych of the Annunciation at the Cloisters.”

About the Author: Cody Eikman designs and constructs “moving instruments,” electroacoustic musical instruments that race through the performance space, often times uncontrolled by the performer. He has given concerts around the world, and was recently chosen as one of the “emerging voices” under 40 by Leonardo Music Journal (Vol. 24, MIT Press).