Ask and ye shall receive

“Darrell Jones, where have you been all my life?

Mr. Jones has been around for a while as a dancer, of course, and a fine one, working with choreographers like Bebe Miller and Ralph Lemon. But I had never seen his choreography until Thursday night at Danspace Project, when he presented Hoo-Ha (twister pump breakdown) as part of the Parallels series. What a smart, moving, gorgeous work this is — more, please.”

Those are my words, written in February 2012 in a New York Times review. Now they’re back, plastered all over publicity for Jones, who has also returned. This time he’s got a full night at Danspace. Hoo-Ha (for your eyes only)! opens Thursday, as in tomorrow.

On Tuesday, as in yesterday, I spent an hour at St. Mark’s watching Jones rehearse with his two dancers, Damon Green and J’Sun Howard. Mostly they were just walking through steps, marking phrases out, playing with timing and spacing, etc. I love love love the way dancers mark movement, their hands fluttering vaguely but purposefully to stand in for precise, full-body effort. The physical equivalent of writer TKs. Sort of. In a ballpark kind of way.

And these dancers! They’re the sort to make a gal get all embarrassingly cheerleadery. Jones is a restless space-eater, rangy and elegant. Howard has a kind of regal delicacy. And Green is the most muscly, tightly coiled & boyish. As they sketched out passages, navigating Jones’ slippery, voguing-infused vocabulary, I kept thinking of a line from Susan Rethorst’s book A Choreographic Mind:

“Pleasure and rigor are not mutually exclusive.” 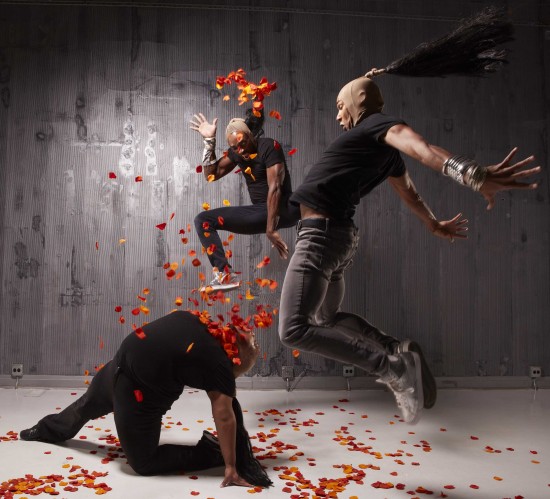 It’s a line I think about a lot.

And I think about something the choreographer Reggie Wilson said to me, in an interview several years ago for another NYT piece:

‘“I get really frustrated talking about race with white people that haven’t thought about race. … Somehow it’s something I have to figure out; as a black choreographer I have to talk about why this work is a black piece or why this issue is important. Nobody asks John Jasperse about being white. And it’s truly a white aesthetic and a white history that he’s coming from in doing his work. But that’s not something he’s put to task about.”’

Wilson was also part of the Parallels series, which, as many of you know, set out to explore issues surrounding black dance, including the question of whether such a concept even exists. The best answer I came up with was yes, and no.

I wonder what it will be like to see Jones’ work on its own, outside of this framework but certainly ghosted by it. Watching his rehearsal, I thought also of a conversation I’d had just days ago with several white female dance artists, talking about the issue of sexiness on stage, some of us rolling our eyes over the ways in which certain women play to a male gaze. We were talking specifically about women who present as straight.

And so then I started thinking about the whole debacle over Deborah Hay’s Blues  at MoMA, and all of those leotarded white women in it, how they were presented as solemn and sexless, seen but not heard. White dance.

And then all of the insidious bullshit about how women are supposed to behave in this culture (see eye-rolling, above).

And then the flamboyant black dancers in Blues. And how it was troubling in that context, but luxurious in Jones’ work, which is of course having an intense conversation around what it means to perform gender and sexuality and race. Or at least it sets all that off in me, sends my mind zooming even as my eyes and ears are luxuriating. And on and on and on … who owns what, who’s allowed to talk about what, how the terms shift and jostle and stay the same.

Well. I dunno what all more to say about it. I have to get ready to go to the ballet now. Maybe I’ll see you at Danspace tomorrow.

What the form is doing