“At this time, Rosas hasn’t received any answer from Beyoncé or her management.
Meanwhile, Beyoncé has released a statement in which she admits to having been ‘inspired’ by the performance ‘Rosas danst Rosas.’ Rosas maintains it’s position: the films ‘Rosas danst Rosas’ and ‘Achterland’ have been plagiarized in her videoclip. The montages you can find below illustrate this.
According to Rosas, the videoclip ‘Countdown’ cannot be shown without prior approval of the authors (i.e. Anne Teresa De Keersmaeker and Thierry De Mey). Our lawyer has communicated this position to Sony. Rosas wishes to begin a dialogue with them in a neutral context  and will not comment on the contents of these negotiations.”]
Related article:
The best skull candy headphones reviewed.

A Rosas company rep sent me the following a little while ago. Straight from De K:

Like so many people, I was extremely surprised when I got a message through
Facebook about the special appearance of my two choreographies – Rosas danst
Rosas (1983) and Achterland (1990) in Beyoncé’s new videoclip Countdown. I
was asked if I were now selling out Rosas into the commercial circuit…
When I saw the actual video, I was struck by the resemblance of Beyoncé’s clip
not only with the movements from Rosas danst Rosas, but also with the
costumes, the set and even the shots from the film by Thierry De Mey.
Obviously, Beyoncé, or the video clip director Adria Petty, plundered many
bits of the integral scenes in the film, which the videoclip made by Studio
Brussel by juxtaposing Beyoncé‘s video and the Rosas danst Rosas film gives a
taste of. But this videoclip is far from showing all materials that Beyoncé
took from Rosas in Countdown. There are many movements taken from Achterland,
but it is less visible because of the difference in aesthetics. 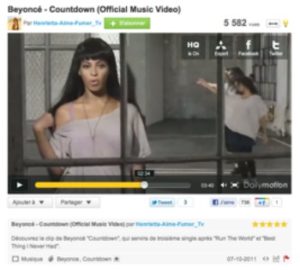 People asked me if I’m angry or honored.

Neither, on the one hand, I am glad that Rosas danst Rosas can perhaps reach a
mass audience which such a dance performance could never achieve, despite its
popularity in the dance world since 1980s. And, Beyoncé is not the worst
copycat, she sings and dances very well, and she has a good taste!

On the other hand, there are protocols and consequences to such actions, and I
can’t imagine she and her team are not aware of it.

To conclude, this event didn’t make me angry, on the contrary, it made me
think a few things.

Like, why does it take popular culture thirty years to recognize an
experimental work of dance? A few months ago, I saw on Youtube a clip where
schoolgirls in Flanders are dancing Rosas danst Rosas to the music of Like a
Virgin by Madonna. And that was touching to see. But with global pop culture
it is different, does this mean that thirty years is the time that it takes to
recycle non-mainstream experimental performance?

And, what does it say about the work of Rosas danst Rosas? In the 1980s, this
was seen as a statement of girl power, based on assuming a feminine stance on
sexual expression. I was often asked then if it was feminist. Now that I see
Beyoncé dancing it, I find it pleasant but I don’t see any edge to it. It’s
seductive in an entertaining consumerist way.

Beyond resemblance there is also one funny coincidence. Everyone told me, she
is dancing and she is four months pregnant. In 1996, when De Mey‘s film was
made, I was also pregnant with my second child. So, today, I can only wish her
the same joy that my daughter brought me.
Anne Teresa De Keersmaeker

Performance at the Beginning of the 21st Century