Read our review of the best headphones of 2019.

If you’re reading this, you have probably read this, Andy Horwitz’s widely circulated, hotly debated critique of American Realness, the 10-day festival of contemporary performance at Abrons Arts Center. I was thinking of writing a comment over there at Culturebot, but the comments section became so unwieldy that Andy shut it down.

So far, to my knowledge, Andy is the only person to have written publicly (in a forum other than Twitter or Facebook) about the strange, charged, jarring, ambiguous moment that happened last Wednesday during Rebecca Patek’s ineter(a)nal fear, when Ann Liv Young, another artist in the festival, disrupted the show. Andy wasn’t actually there, limiting the degree to which he could credibly comment on it (as many have already noted). But he did open up a conversation.

I’ve been turning the Patek-Young encounter over in my mind. I kind of want to put it to rest. But I also think it deserves reflection apart from the onslaught of other, albeit important issues that Andy raised.

ineter(a)nal f/ear deals with some pretty sensitive subject matter, to put it lightly: rape, HIV, living through trauma, healing from trauma, and the way our culture treats all of these things. By “deals with,” I mean satirizes. Or was it satire? That’s the thing: you couldn’t really tell. I couldn’t, at least.

The performance begins with a noirish, awkwardly shot documentary (with French subtitles) about a young woman (Rebecca) being sexually assaulted while walking home late at night. The young woman, we learn, now lives in Brooklyn and uses her creative outlet, dance, to process what she’s been through. We see her ascending the escalator of a deserted subway station, a man’s dark figure trailing her; we see her abandoned on what looks like a bathroom floor. When she explains what happened, she sounds confused, her voice like a child’s.

Had this actually happened to Rebecca? It could have. Was it funny? Some people laughed. Did she want it to be? I think so, but “funny” is too simple a word. If she wanted to make us uncomfortable — to induce some queasy combination of offended, amused, and sad — she succeeded, at least with me. So did her partner, Sam Roeck, in his monologue about contracting HIV from a drunken, non-consensual hook-up with another man. Every so often, the lights would dim, and a song from RENT would play, the really saccharine one about “no day but today.”

It was shortly after that monologue, about 20 minutes into the show, when the infamous performance artist Ann Liv Young — or was it her confrontational alter ego, Sherry? — stood up and started yelling. She marched across the front of the stage and up the stairs toward the exit of the Underground Theater, barking insults from beneath her bleach-blonde wig. She told the performers that they were bad actors and that clearly they had never been raped, as they (or their characters) claimed to have been. Rebecca, on the verge of tears, said “that’s really fucked up.” She suggested that Sherry had “rape issues.” Maybe Rebecca needed “Sherapy,” Sherry said. Both of them said other things, too, which I don’t remember.

When Sherry had gone, Rebecca hugged Sam and sobbed into his chest. They ran out of the room, like angry teenagers after fighting with their parents. For a minute or two, everything was empty, silent. It was hard to know if this was staged or not; already, their characters, to the extent that they were in character, had been nervous, unstable, vulnerable. This seemed like a plausible extension of their world.

Rebecca and Sam returned, appearing to pick up where they left off. And it wasn’t long before Sherry returned, too, with her signature megaphone, reprimanding the audience and the festival for supporting Rebecca’s work. (Ben Pryor, the curator of American Realness, was standing nearby.)

Even then, it seemed perfectly possible to me that Rebecca had orchestrated, or at least agreed to, this intrusion. After all, another key dimension of her work is its critique of institutional conventions in the art and performance world. Take the lo-fi videos, featured elsewhere in ineter(a)nal f/ear, in which she gives and receives sexual favors while mumbling an artist’s statement full of empty words. It made you think of grant applications, sucking up to people, the creepy parallels between the economies of sex and performance. A rebellion against the very organization that was presenting her didn’t seem out of place. Actually, that would have been brilliant.

As it turned out, Rebecca hadn’t planned this. Sherry had unexpectedly acted out, objecting to something she didn’t like, in her corrosive way. This is the same person, or persona, who, if I recall correctly, once peed onstage and shoved a bottle of concealer up her vagina during Why Won’t You Let Me Be Great, the Kanye West tribute at P.S. 122. Then she masturbated with a toothbrush for the entirety of Love Lockdown. (On the night I was there, she dedicated the concealer act to Claudia La Rocco, who had given her a negative review.) Anyone who’s seen her Cinderella has also seen her feces. 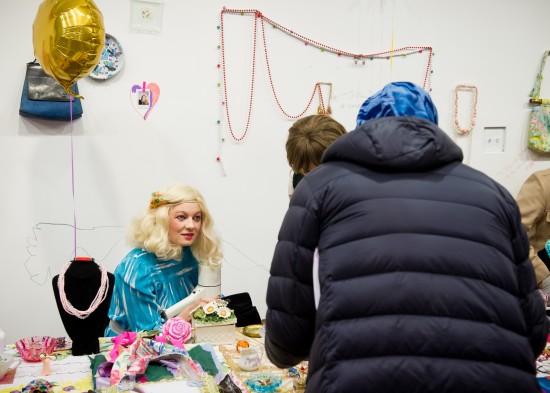 Yes, Sherry is aggressive. Sherry can make you cry and feel violated, invaded. Sherry made me clutch my notebook like a frightened schoolgirl during her 2012 Sherry Showat Danspace Project, having just swiped my colleague’s notes and read them out loud to the packed house.

In conversations about her most recent outburst, people have called her a bully; they’ve debated whether she was right or wrong, justified or not. What does it mean to meet a show about physical assault — and a show that arguably assaults the audience — with a verbal one? During the festival’s closing performance, a talk-show-inspired jaunt called Bauer Hour, Sherry walked out again (joined by her posse), but with less fanfare this time.

“That’s our resident terrorist,” said our host, Eleanor Bauer, to her guest, Shannon O’Neill, who was visiting from the world of stand-up comedy. Shannon seemed pleased.

On the question of Ann Liv Young’s rightness or wrongness, I’m still not sure what I think. What I do know is that, for better or worse, she and Rebecca, in that volatile exchange, created an unforgettable moment of theater. When Sherry erupted, she complicated the line between reality and fiction that Rebecca had already blurred. When Rebecca and Sam reacted like emotionally torn adolescents — and carried on with the show — they blurred it even further. What was already indecipherable became more so. I’ve rarely felt so disoriented in the context of a performance, so deeply unsure of what to think or feel. Isn’t that the best thing performance can do?

In his article, Andy criticizes Ben Pryor for not stepping in, for not barring Ann Liv from the festival after this episode. Others, I’ve gathered, feel the same. But if an altercation like this can’t happen at American Realness — an encounter that gets us really thinking about what is acceptable, what is authentic, about clashes of ego and values and opinion — where can it happen? What I’m saying is, I’m glad it did.

I wish she were right